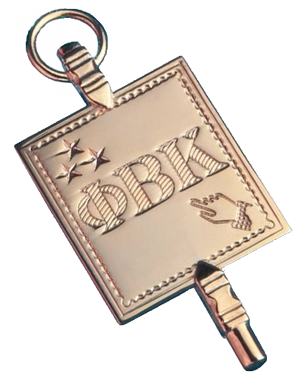 Philosophia Biou Kubernetes,
“Love of wisdom, the guide of life.”

The Society’s distinctive emblem, a golden key, is widely recognized as a symbol of academic achievement.

Phi Beta Kappa, founded at the College of William and Mary in 1776, is the oldest undergraduate honors organization in the United States. Its mission is to recognize academic excellence and promote education in the liberal arts and sciences.

For the past 225 years, election to Phi Beta Kappa has been a recognition of outstanding academic achievement. The goal of the Phi Beta Kappa Society is to encourage humane learning—an object which transcends the mere gaining of knowledge to encompass breadth of interest, depth of understanding, intellectual honesty, and respect for a diversity of informed opinion. Today, the Phi Beta Kappa Society, with about half a million living members, is one of the nation’s leading advocates for the liberal arts and sciences at the undergraduate level.