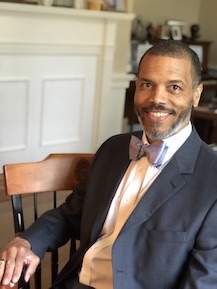 Dr. C. Damon Moore, who is a Virginia-based pediatrician and the first African American Rhodes Scholar from Mississippi, will be inducted into the University of Mississippi chapter of ΦBK as an alumni member this April. Moore received his M.D. from Johns Hopkins and now goes above and beyond his duty as a pediatrician by serving as a lifelong mentor to his patients and getting involved in the local community through healthcare programs, such as facilitating a “For Dads Only” group for expectant fathers and providing free sports physicals to underserved adolescent athletes.

“The Beta of Mississippi chapter at the University of Mississippi is thrilled to nominate, and induct, two alumni members in 2020, the 20th anniversary of our chapter’s existence,” said Chapter President Sandra Spiroff. “The rationale for alumni membership is to honor the academic achievements of former students who earned Phi Beta Kappa status prior to the inception of our chapter in 2001.” In addition to Moore, the chapter will also induct Ray Mabus, former governor of Mississippi.

Moore grew up in the small town of Coldwater, Mississippi, where his parents, who were both educators, taught him the value of community, service, and education. “We taught our children that as long as they give back to society, we will be proud,” said his mother, W. Jean Moore, who was also his high school English and speech teacher.

Moore inherited his mother’s passion for literature—majoring in English at the University of Mississippi (B.A. 1986) and receiving an M.A. in English at Oxford University as a Rhodes Scholar in 1989. While Moore was at Oxford, his mother would call and recite him lines from Walt Whitman’s Song of Myself: “Failing to fetch me at first keep encouraged, / Missing me one place search another, / I stop somewhere waiting for you.”

Seeing the world as a novelist led to Moore’s decision to become a physician. “I think about plot, character, themes, and that gives me the idea there’s a lot of stuff wrong in the world, a lot of suffering,” Moore said. “And becoming a doctor was a natural reaction to that.”

Moore’s mother also taught him that it never hurts to be nice. “It doesn’t matter how smart you are,” she said, “if you don’t have the right attitude, you won’t succeed,” which is certainly a lesson that Moore internalized. When he found out he would be inducted as a ΦBK honorary alumni member, Moore was so humbled, he sat down and wrote 51 handwritten notes to all of the resident members at the University of Mississippi. “I remain indebted to my professors who challenged my thinking in lectures, tutorials, and seminars,” Moore stated. “The result has been that now, more than 30 years since my leaving Ole Miss, I still consider myself a student of life.”

Associate Dean Emeritus of Liberal Arts Michael Dean, who first had Moore as a student in a 200-level literature survey course, now acts as a godfather figure to Moore. The two first became close when, one day after class, Dean asked Moore to stay behind and told him he was a remarkable writer. Moore then took a tutorial with Dean, and over the years they stayed in contact. When Moore’s father, Clen Dempsey Moore Jr., passed away in 2015, Moore reached out to Dean and asked him to deconstruct a poem he had written about his father. “It was one of the most amazing things that has ever happened,” Moore said, “just to have my teacher at Ole Miss teach me a poem that I wrote, to help me understand on a deeper level where these feelings where coming from.”

Now, as a pediatrician, Moore fosters this same type of continuous mentorship with his patients. Former patient, Marc St. Raymond, who began seeing Moore at 14, said that their relationship grew into a friendship anchored in mutual trust and respect. St. Raymond remembers when Moore showed up to his last competitive high school swim meet. “It meant a lot,” St. Raymond said. And later in life, five or so years after he graduated from college, St. Raymond was feeling a bit lost, so he called Moore. St. Raymond had gone down one career path and wasn’t sure if it was right, or what he should do next, but Moore was able to talk him through it. “He really helps young people in moments of ambiguity,” St. Raymond said. “He always had an interesting perspective to share and was very empathetic.”

Growing up, Moore also had a close relationship with his pediatrician, Jack Segal, who practiced for 67 years in Memphis. Dr. Segal encouraged Moore’s academics by always asking to see his report card, and when Moore graduated as class valedictorian, Segal gave him a silver chain bracelet, on which his initials “CDM” were engraved. Then, when Moore completed his medical residency in 1995, he returned to visit Segal, who took him to every patient exam room, with his arm around his waist and introducing Moore as “one of his babies” who had become a pediatrician. “It embarrassed me to see how proud he was,” Moore said. “Now that I’ve been doing this a while, I can say I know exactly how he felt.”